La MERCE. Welcome to our curated guide to the best events during the festival of festivals

This 200-year-old festival is celebrated around the feast day of the Virgin of Mercy (Mare de Deu de La Merce) on the 24th of September and attracts up to 2 million people. This year, the official public holiday is on the 24th of September so make sure to plan ahead. Also, the guest city is Beirut so look out for Lebanese performers during the festival.

To give you an idea of how much fun the La Merce festival in Barcelona is, check out the video from 2017 below.

Who is La Merce and why are we celebrating in Barcelona?

According to the festival organisers:

“The legend goes that on the night of 24 September 1218, the Virgin appeared simultaneously to King Jaume I, Saint Pere Nolasc and Saint Ramón de Penyafort. She asked all three to create an order of monks dedicated to saving Christians imprisoned by the Saracens. It was the time of the wars of religion.

Centuries later in 1687, Barcelona suffered a plague of locusts, and placed itself in the hands of the Virgin of La Mercè. Once the plague had been overcome, the Council of the City named her patron saint of Barcelona. The Pope did not ratify this decision until two centuries later, however, in 1868.”

Also, make sure to bring an umbrella as legend dictates that there will be a storm during the festival courtesy of Santa Eulalia who became jealous when she was dethroned as the original female patron saint of Barcelona. So far, it has rained every year on at least one of the days. Don’t say we didn’t warn you!

By the way, everything is free to join during the festival. Have an amazing time!

An absolute must for first timers to the festival. This year’s light and sound production features contemporary dance as the main theme.

There will be food trucks featuring global street food during the festival.

A big screen will be set up on the square to broadcast the live event from the city hall.

Follow the marching band with dragons, giants and groups in festival attire.

Inaugural Sardanas (In front of the cathedral, Plaça Nova)

Free folk rock and latin pop concert in front of the cathedral. 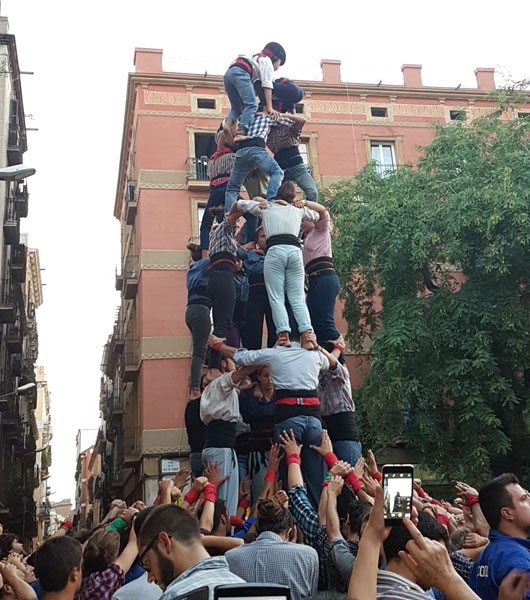 This is the prelude to the main event on Sunday. This year’s guest groups: els Minyons de Terrassa and els Castellers de Vilafranca are featured in a procession from La Rambla to the city hall where they form human towers.

Dancing devils, fantastic beasts, drums and fire! Get ready for this crazy festival highlight which originated in the 14th century. Make sure you stay well away from the main road or at least wear all cotton long sleeved tops in case you are caught in the middle.

This starts on Via Laietana by the cathedral and ends at the Post Office.

This marks the 22nd anniversary of the fireworks festival at La Merce. 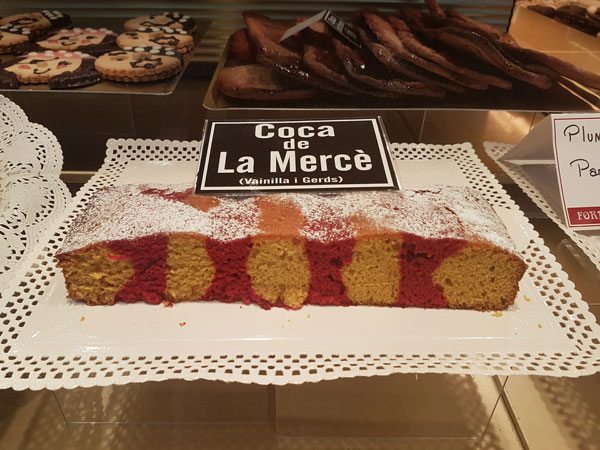 During the festival, many museums are opening their doors to the public, free. Including the Picasso museum.

Here is a list of the best Barcelona museums to visit free this Sunday:
https://www.timeout.com/barcelona/things-to-do/la-merce-2017-open-doors

The human tower groups from each Barcelona neighbourhood will show off their displays in front of the city hall, some of them up to 8 stories high! Not to be missed.

The colors of the earth (La Pedrera)

‘Els colors de la terra’ (‘The colours of the earth’) at La Pedrera is a rare treat. A video mapping show with singers directed by Lluís Danés will feature music composed by Xavi Lloses.

This marks the 20th anniversary of the fireworks festival at La Merce.

The light and sound show on Saturday will be delivered by TFG Producers, a company from Panama which has been creating fireworks displays in Latin America for the past 20 years. 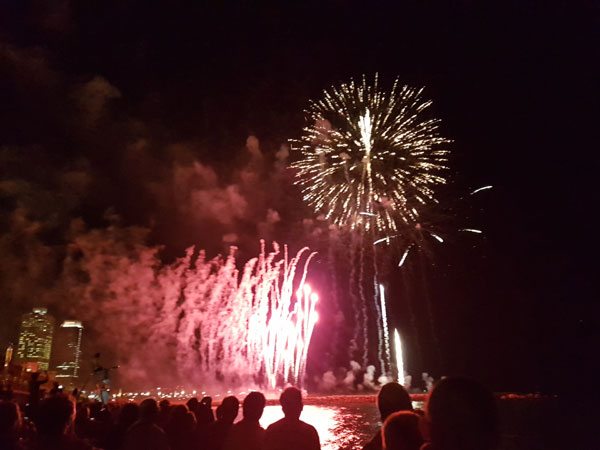 Forget the Magic Fountain. This is like the New Year’s eve countdown with light, sound, fireworks and live music. The much awaited closing ceremony this year will feature the 25th anniversary of the 1992 Olympic Games;

Bring snacks and sparklers to light up at the end.

The official programme from the city hall:
https://www.barcelona.cat/lamerce/en

Public transport during the festival:

The good news is that the metro will run non stop from Friday 0500 until Monday at midnight.
https://www.tmb.cat/en/

Remember, you can always get in touch with us if you would like a Barcelona guide to the local traditions and taste all the delicious festival food.