Halloween in Barcelona 2018 – How To Celebrate Like a Local

Halloween – Is It A Local Tradition?

As with most holidays in Spain, the Spanish celebrate “Halloween”  for at least 3 days and often until the following weekend.

In Spain, the families gather and pay respects to their dearly departed on All Saints’ Day on the 1st of November. They often go to the cemeteries to pray, lay flowers on the family tombs and light candles.

Although people now normally dress up (adults and children alike) for Halloween and decorate with pumpkins, this is not a traditional celebration in Spain. They might even go to mass on  the 1st of November to pray.

What To Eat For Halloween in Barcelona

No trick or treat here in this country, I’m afraid! This is definitely an American tradition that is limited to some expat circles.

However, they do have some interesting food items for you to try, not just the usual sweets and chocolates.

All over Spain, families eat huesos de santo (saint’s bones), marzipan sweets named because of their shape and appearance, not because of any bones!) and also buñuelos de viento (light fried choux balls dusted with sugar) which can be filled with creme patissiere or chocolate truffle. 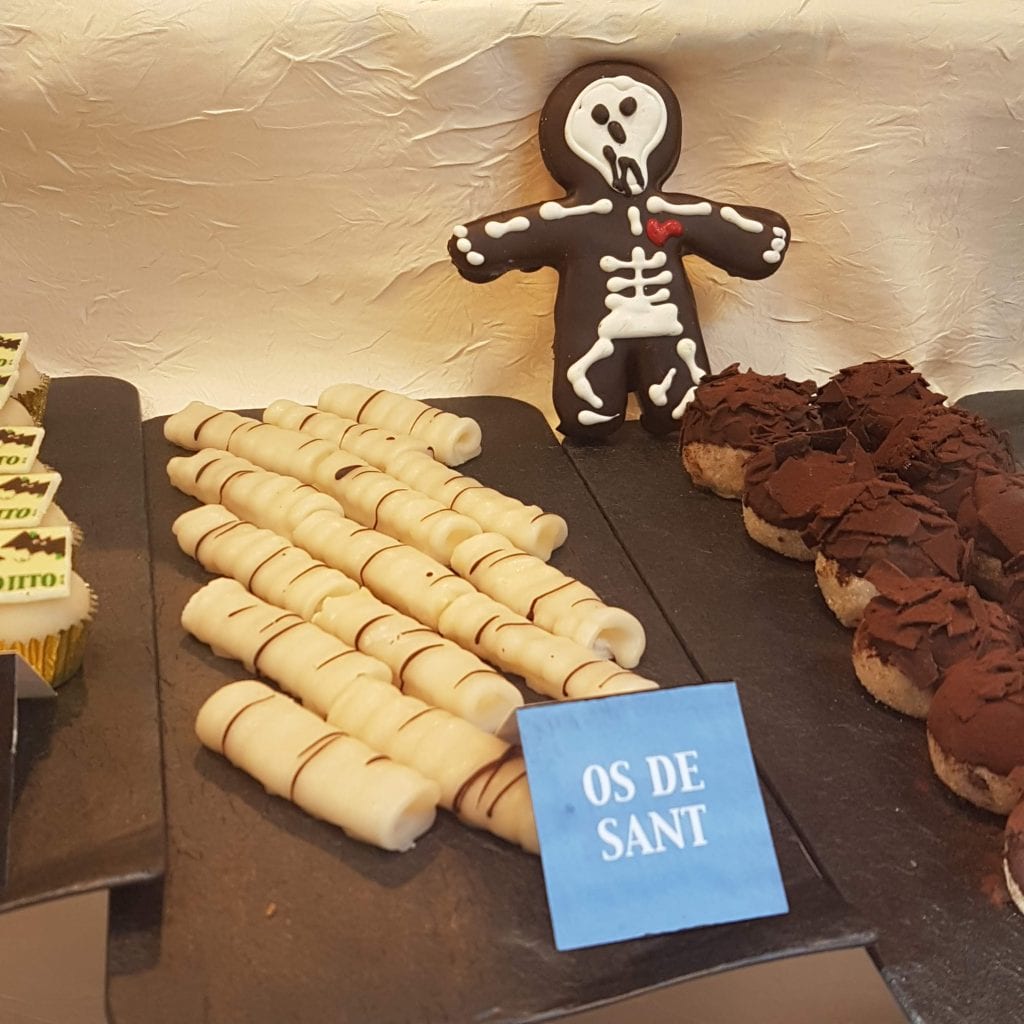 In Barcelona, you will notice that a castanyera (lady selling roasted chestnuts, castanyes in Catalan) has magically appeared on your street corner. This marks the beginning of autumn and the celebration of the castanyada featuring chestnuts of course!

For the castanyada, the local families gather on All Hallow’s Eve (31st of October) and feast on roasted chestnuts, roasted sweet potatoes and little marzipan sweets called panellets, typically made of ground almonds, sweet potatoes, sugar, lemon zest and rolled in pine nuts.

This is all washed down with the local sweet wine, moscatel.

Centuries ago, they used to have this meal on the eve of All Souls which is the evening of the 1st of November. They had to ring bells all night until dawn and needed these calorie-rich food for sustenance. The traditional meal eventually moved to the 31st.

If you would like to try making these at home, here is a simple traditional recipe:

This recipe is good for 8-10 people and is the traditional recipe which contains no added sweet potato for bulk. This is recommended by the purists.

Mix together the ground almonds, sugar and lemon zest.

Add the water and stir until you achieve a homogenous mixture.

Leave in a fridge wrapped in cling film for at least a few hours, preferably overnight.

Once you’re ready to continue, preheat the oven to 250c.

Roll some dough into a long, thin cylinder. Cut into small portions and make a small ball with each one.

Roll each ball in the pinenuts, making sure that it is fully covered.

Beat the egg yolk and lightly brush each ball.

Bake on a cookie sheet for 5-6 minutes until light brown.

Where To Try The Best Panellets in Barcelona

One of the oldest bakeries in Barcelona which has been serving top quality sweets and pastries for more than 150 years, here you can sample over a dozen traditional types of panellets.

This is where the posh retirees of Barcelona hang out in the afternoon. You can try the traditional panellets here, from pine nuts to chocolate and coconut.

Try beautifully formed fruity panellets such as raspberry, lemon or cherry in this award-winning patisserie.

This is an obligatory stop in Barcelona, with a shop just next to the Boqueria market and a bigger one on Gran Via. Try panellets with a modern twist from an old friend of the Adria brothers of El Bulli fame.

The 1st of November is a national holiday in Spain. Major shops will be closed. Some restaurants and most patisseries will be open in the morning.

Wondering what else to do for Halloween?

You can check out a selection of Halloween parties and activities curated by Timeout here.